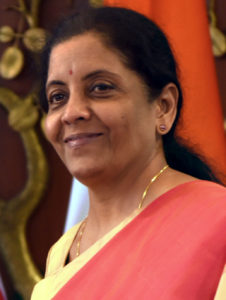 An Indian Politician Smt. Nirmala Sitharaman is the Current serving as Cabinet Minister of Finance in the Indian government. She was born on 18 August 1959 in the middle-class family at Tiruchirapalli Tamil Naidu. She is Brahmin by Caste. His father Sh. Narayanan Sitharaman was the employee of Indian Railways and her mother K.Savitri was the house-wife and great lover of books. She has one sister. Nirmala finished her graduation from Sethalakhsmi Ramasamy College Tiruchirapalli. She completed her masters in Economics from Jawahar Lal Nehru University Delhi. She completed a Ph.D. in Indo European textile trades.

She is married to Dr. Parakala Prabhakar in 1986. Her husband is a Political Commentator and Communication Advisor. After marriage, she moved to London with her husband and set in the corporate world. In 1991, she came back to India and moved to Andhra Pradesh. She was settled in Hyderabad after the birth of her daughter Vangamayi. Sitharaman Mother-in-law was the MLA of Congress in Andhra Pradesh and her father-in-law was the Minister of Congress Party of Andhra Pradesh in the 1970’s. Sitharaman joined BJP in 2006. She became the spokesperson of BJP under Ravi Shankar Prasad. She faces a successful life in London. It is easy for her to climb up the ladder of success with BJP. She was served on an important position in the Political Party. In 2010, She was appointed as the spokesperson of the party in the tenure of Nitin Gadkari. As the spokesperson, she defended BJP party leaders even PM Modi in every awkward situation and praised the party on National Media. She became the well-known personality in Delhi also in Gujarat party headquarters. From 2003 to 2005, when she came in touch with Sushma Swaraj a senior leader of BJP, and became a member of the National Commission for Women in the Atal Bihari Vajpayee’s Govt. Smt. Sushma Swaraj recommends her name to the party because she was impressed by her personality and her outspoken views.

She became a member of the Rajya Sabha from Andhra Pradesh. After the death of Nedurumalli Janardhan Reddy, TDP offered his seat to Sitharaman. She is representing Karnataka as the MP of Rajya Sabha.

Send your problems Through mail to Smt. Nirmala Sitharaman

If you want to meet Smt. Nirmala Sitharaman then you can go to this address but make sure you have an appointment.

If you want to write a letter to Smt. Nirmala Sitharaman Then follow this process given below.