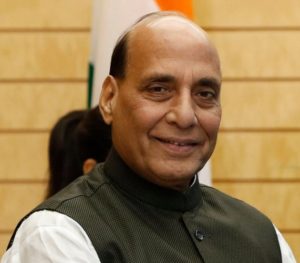 Rajnath Singh was born on July 10, 1951, in Bhabhaura suburb of Chandauli district, Uttar Pradesh. His father’s name is Mr Ram Badan Singh. His mother’s name is Gujarati Devi. He went to Gorakhpur University for his Master’s degree in Physics. He married Mrs Savitri Singh with whom he had three children. He is a member of Bhartiya Janta Party.

Since the age of a teenager, he had an interest in politics. At the age of 13, he joined Swayamsewak Sangh in 1964. He was appointed as the Secretary of Mirzapur in 1974. He was also the former Education minister of Uttar Pradesh state in 1991. He was also the President of BJP in Uttar Pradesh in 1997. He also became the Union Cabinet Minister for Surface Transport in 1999. During Mr Narendra Modi’s government in 2014, he was also appointed as the Union Minister of Home Affairs. He took oath on May 26, 2014. He became the Defence Minister of India on May 31, 2019, under the rule of the Modi government.

If you want to contact the Defence Minister Of India by Mobile you can try numbers given below.

Send your problems through e-mail to Rajnath Singh

Write a letter to, Rajnath Singh

If you want to write a letter to Rajnath Singh Then follow this process given below.

Minister of Defence of India,

You can also contact through an online form. which is available on their website https://www.rajnathsingh.in/write-to-raksha-mantri/.You have to give all the information like the Name, E-mail, Phone, Your Suggestion, Once you fill all details press submit button.