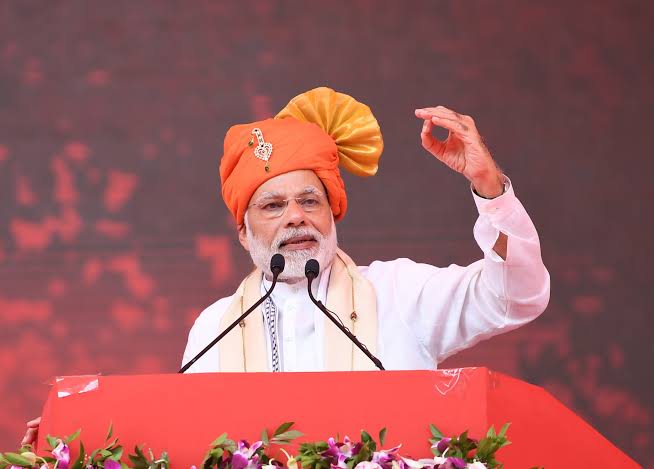 Narendra Modi is a leading Indian Politicians and current Prime Minister of India. He is also known as a Narendra Damodardas Modi. He was born to a family of grocers in a town called Vadnagar in Mehsana District of Gujarat. He was born on 17 September 1950 to Damodardas Mulchand Modi and Herraban Modi. He was the third eldest child in his family. He did his schooling from Higher Secondary School from Vadnagar. He completed his Bachelor’s in 1978  from Delhi University and Masters in 1983 in Political Science from Gujarat University, Ahmedabad. His father was a street merchant who struggled to support the family. Young Narendra and his brother sold Tea near a bus terminal to help out. He was an average student in the school. He spent hours in a library and was known as a strong debater. During his college days, he worked as a Pracharak [Promoter] of RSS. He left his home at the age of 17 and travelled across the country for the next two years because of an arranged marriage which he rejected. He was married to Jashobaden Chimanlal Modi.

Narendra Modi joined Bhartiya Janta Party in 1985 which stood for Hindu Nationalism. He became the General Secretary of BJP’s Gujarat Unit in 1988. During the 1990s Modi was served as the official spokesperson of BJP in New Delhi. He has completed a long-term course of three months in public relations and image management in the US. In 1995 Modi was appointed as the Secretary of BJP’s National Unit. In 1998 Modi was promoted to General Secretary and held the position until October 2001. After winning the Gujarat Assembly Elections three consecutive times and holding the position of the state CM. Modi contested the 2014 Lok Sabha Elections for the first time. He won the election by the great margin and became the PRIME MINISTER OF INDIA.

Narendra Modi governed as a CM of Gujarat for 13 years. He was selected by L.K Advani a leader of BJP. Modi was the longest-serving CM of the state. Modi also won the Gujarat Legislative Assembly Elections in 2012. He won his fourth consecutive term as a Chief Minister of Gujarat. Modi spoke about the economic growth and encouraging policy to shape India as a Global Manufacturing Epicenter.

In the year 1975 Prime Minister Indira Gandhi declared an EMERGENCY in India. Modi was appointed as a general secretary of the GUJARAT LOK SANGHARSH SAMITI. When the RSS was banned Modi was forced to go underground in Gujarat to avoid arrest. Modi wrote a book in Gujarati Sangarsh ma Gujarati [In the struggles of Gujarat]. In this book, he describes the incidents or events during the emergency.

In 2013, Modi was named the BJP’s candidate for Prime Minister in the Lok Sabha Elections in 2014. He played a dominant role in the BJP’s election campaign. Modi was sworn in as the Prime Minister of India on 26 May 2014 at the Rashtrapati Bhavan. As the prime minister, Modi worked for the welfare of the country by launching the policies like Health and sanitation policies, economic, Hindutva and education policy, foreign policy, defence policy and environmental policies. In the DEFENCE POLICY Modi has stated that Pakistan was an Exporter of Terrorism. The Indian Army stated that it had conducted a surgical strike on the terror launched in Azad Kashmir. In the EDUCATION POLICY Modi Govt. began a formulating a NEW EDUCATION POLICY or NEP soon after its election. The policy was described as having the overtones of  HINDUTVA.

The policy proposed the bringing religious education institution under the Right to Education Act. In the ECONOMICS POLICY Modi set up a team to investigate black money. On 9 NOV 2016 the Govt. Demonetised the 500 or 1000 banknotes. The country faced severe cash shortages which had an effect on the small business, on agriculture and on transportation. People seeking to change their notes had lengthy waits and several deaths were linked to the rush to exchange cash. In the HEALTH POLICY, Modi was launched SWACHH BHARAT ABHIYAN (clean India) campaign. The Indian Govt. began constructing the millions of TOILETS in rural areas and encouraging people to use them.

Modi started a monthly radio programme MANN KI BAAT in October 2014. He also launched a DIGITAL INDIA PROGRAMME which has a goal of ensuring that government services are available electronically, building infrastructure to provide high-speed internet access to rural areas,

In 2007 He was named as the best CM in the country in a survey conducted by the India Today Magazine. The FDI Magazine honoured him as an Asian Winner of the FDI personality of the Year Award in 2009. In 2014 He ranked number 15 on Forbes Magazine list of the World’s Most Powerful People. The computer society of India bestowed him the E-Ratna Award. He was conferred with The Gujarat Ratna Award at the Ganesh Kala Krida Manch.

The Biggest Controversy in his career is the 2002 Gujarat Riots in it’s he has been criticised to the mastermind of it. Teesta Setalvad held him responsible for the murder of her husband in the Gulbarg Society in 2002. He also has been criticised regarding his marital status. He was criticised for tapping the phone call of a girl in the Snoopgate Scandal. He was denied a visa by the USA for his role in the Gujarat Riots. In 2005 he was criticised for wearing a suit of Rs. 10 Lakh with the monogram of his name Narendra Modi.

Sh. Atal Bihari Vajpayee and Syama Prasad Mukherjee are the favourite Politicians of Modi. He also has a two favourites leaders Mahatma Gandhi and Swami Vivekananda.

Send your problems Through mail to PM Narendra Modi.

If you want to meet PM Narendra Modi then you can go to this address but make sure you have an appointment.

Indian Prime Minister office is the midpoint for all the departments which come under the Government of India. The PM Office is located in New Delhi.

Write a letter to PM

If you want to write a letter to PM Narendra Modi. Then follow this process given below.

If you are an android user and you love to read what Prime Minister Modi is doing they you must have Application On your phone download app via given link.