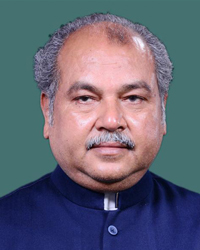 Sh. Narendra Singh Tomar is a leader of B.J.P and the current cabinet Minister of Rural Development, Panchayati Raj, and Mines in the Modi’s Government. His nickname is Munna Bhaiya, the name given by Babulal Gaur. In the NDA Govt. he became the cabinet minister for the second time in the Madhya Pradesh government. He was born in the Rajput family on 12 June 1957 in the village Morar Gwalior, Madhya Pradesh. He is the son of the Munshi Singh Tomar and Sharda Devi Tomar. His parents are well-educated people. He is married to Kiran Tomar. She is the housewife. He has two sons and one daughter. He completed his graduation from Jiwaji University.

Narender Singh Tomar has a great interest in sports and he is appointed as the President of the DARPAN SPORTS SANSTHAN. He also takes participates in social and cultural activities. He was a farmer before joining the Politics. He was not involved in any scandal or criminal case. He has a very clean and clear image as a Politician.

Send your problems Through mail to Sh. Narendra Singh Tomar.

If you want to meet Sh. Narendra Singh Tomar then you can go to this address but make sure you have an appointment.

If you want to write a letter to Sh. Narendra Singh Tomar Then follows this process given below.