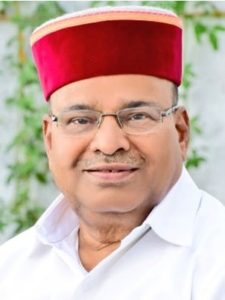 In Modi’s Cabinet, Thawar Chand Gehlot is the Current Union Minister of Social Justice and Empowerment. He is the very popular face for the Scheduled Caste in the BJP. He was born on 18 May 1948 in Rupeta Village, Ujjain, Madhya Pradesh. He belongs to Dalit Community. He completed his graduation from Vikram University Ujjain, Madhya Pradesh. He is married to Anita Gehlot. He has four children. He has one daughter and three sons.

When Thawar was appointed as the cabinet minister he said that his ministry will work for the Benefits of the Scheduled Caste and Other Backward Classes. His Ministry also launched the Schemes for the senior citizen and for drug prevention. Vidhayani is an article written by Thawar. This article is about the journal of MP Legislative Assembly. He got a big achievement when he was selected as the best Legislator award by Madhya Pradesh Legislative Assembly.

Send your problems Through mail to Sh. Thawar Chand Gehlot.

If you want to meet Sh. Thawar Chand Gehlot then you can go to this address but make sure you have an appointment.

If you want to write a letter to Sh. Thawar Chand Gehlot Then follows this process given below.