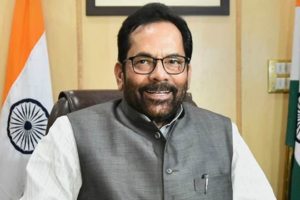 Mukhtar Abbas Naqvi was born on October 15, 1957. He was born and brought up in Allahabad, Uttar Pradesh. His father’s name is Mr AH Naqvi and his mother’s name is Mrs Sakina Begum. He pursued a degree in arts and mass communication from Asian Academy of Higher Studies, Noida. In the year 1983 on June 8th, he married Mrs Seema Naqvi with whom he had a son.

He came into politics as a student leader. During the time of emergency in the country, he was jailed at the age of 17 years due to his participation in political activities. He lost the elections in 1980 of the Uttar Pradesh Legislative Assembly. During Atal Bihari Vajpayee government he served his duties as the Minister of Information and Broadcasting. In the first term of Mr Narendra Modi government in 2014, he was given the post of Minister of State for Minority Affairs and Parliamentary Affairs. He continued his duties as Minister of Minority Affairs during the second term of Narendra Modi government. He sworn oath on May 30, 2019. He is also the author of three books namely Syah ( 1991), Danga(1998) and Vaisali( 2008).

Send your problems through e-mail to Shri Mukhtar Abbas Naqvi

If you want to write a letter to Shri Mukhtar Abbas Naqvi Then follow this process given below.