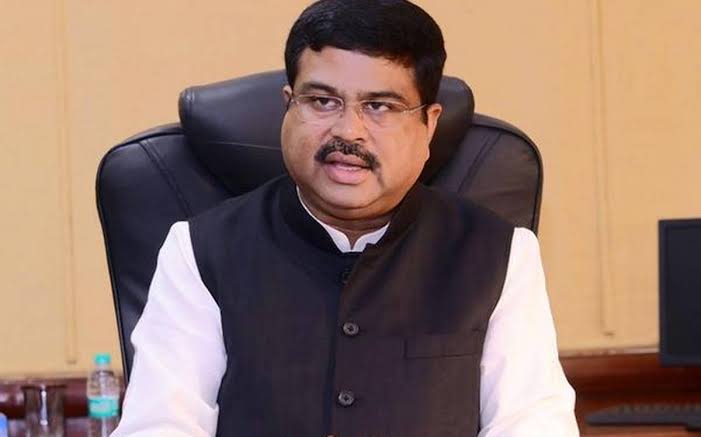 Sh. Dharmendra Pradhan is an Indian Politician and a leader of BJP. He is Current Union Minister of Petroleum & Natural Gas and Minister of Steel in the second term of Modi Government. He was born on 26 June 1969 in Talcher, Distt Angul, Odisha. His father Sh. Debendra Pradhan was in the politics and a former MP of BJP and his mother Smt. Basanta Manjari Pardhan. He is married to Mridula T. Pradhan on 9 December 1998. He has one son and one daughter. He has a degree of Masters in Anthropology at Talcher College Odisha and Utkal University, Bhubneshwar.

Dharmendra Pradhan joined politics as a member of ABVP. He was elected as the President of the student union of his college in 1985. He also participated in Student Movements in Odisha. From 2004 to 2006 he became the National Secretary of ABVP and Bhartiya Janta Yuva Morcha. In 2004, he entered into National politics. Pradhan’s father was an MP from Deogarh constituency and became the minister in Atal Bihari Vajpayee’s govt. He left his seat for his son Dharmendra Pradhan in 2004. He won Lok Sabha Election from Deogarh constituency in 2004. He did not win the 2009 elections. From 2000 to 2004 he became the member of the Odisha Legislative Assembly. He was elected to 2004 Lok Sabha. In 2012, he was elected to Rajya Sabha and became the member of the committee on Rural Development, Agriculture, Government Assurances, and Joint Parliamentary Committee.  He was elected as the party In-Charge for Tripura, Chattisgarh, Karnataka, Uttrakhand, Jharkhand, and Odisha. He was appointed as the Minister of Petroleum and Natural Gas in May 2014.

Dharmendra Pradhan also played a significant role as the social worker. He is very concerned about the problems of Unemployment, Education, and much more which are faced by the Young People in our country. In his career, he also worked for the development of backward Classes and for the farmers also. He loves reading and travelling.

Send your problems Through mail to Sh. Dharmendra Pradhan

If you any work related to Ministry of Petroleum & Natural Gas office and Steel you can reach to these given address, are these departments which come under Dharmendra Pradhan.

If you want to write a letter to Sh. Dharmendra Pradhan Then follows this process given below.

You can also contact through an online form. which is available on their website http://petroleum.nic.in/feedback You have to give all the information like Feedback Topic, Name, E-mail Address, Phone, Mobile, Address, Comment. Yours enquires to Sh. Dharmendra Pradhan. After filling all information click on Submit button.

You also contact them through by Website, E-mail, Telephonically or Social Media. All the contacts numbers or addresses are mentioned above. Please check according to your convenience.