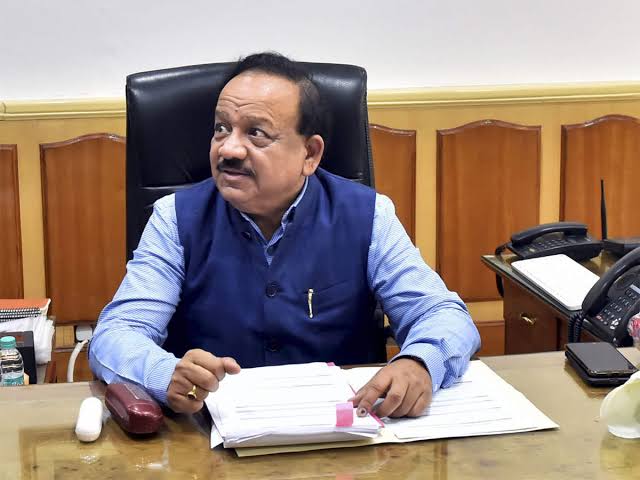 An Indian Politician Dr Harsh Vardhan belongs to Delhi. He is the current handling Ministry of Science & Technology, Ministry of Health and Family Welfare and Ministry of Earth Science in the Second term on Modi Govt. He was born in Delhi on 13 December 1954 to Om Parkash Goel and Sneh Lata. He is the second child in his family. He has one elder sister and one younger brother. He completed his schooling from Anglo Sanskrit Victoria Jubilee Senior Secondary School Daryaganj. He completed his Bachelor’s of Medicine and Bachelor’s of Surgery from Kanpur, Ganesh Shankar Vidyarthi Memorial Medical College. He has a degree of Masters in Surgery in 1983. He practised as an ENT surgeon in Delhi.

Dr Harsh Vardhan is married to Nutan. He has three children. He has two sons named Mayank & Sachin and one daughter. Mayank is a doctor. He is an MBBS and MBA. His son Sachin is graduated from Monash University. He studied Accountancy and Finance.  She is graduated in B.Com from Delhi University. Dr Harsh Vardhan was a member of RSS in his school time. He worked as the ENT surgeon and social leader before joining politics.

Dr Harsh Vardhan was active in Politics from 1990. He representing Krishna Nagar in 1993 and won the state elections. He appointed as the State Education Minister in 1994. He was elected for the next four terms of State Assembly Elections since 1998. He was selected as the BJP Chief Minister candidate in 2013 Delhi Assembly Election. He was contested from the Chandni Chowk constituency of Delhi for the 2014 General Elections. He won the seats with the huge margin and defeat Ashutosh and Kapil Sibal by 437938 votes.

Dr Harsh Vardhan served as the Union Health and Family Welfare on 26 May 2014. During the Shuffling in the Cabinet, he was appointed as the Minister of Science and Technology on 10 November 2014.

Dr.Harsh Vardhan received an award of  IMA special award of appreciation in 1994. He received AGGARWAL RATAN AWARD,  Lions International Service Award in 1995, Ahimsa Samman by Maha Jain Sabha in 1996, National Environmental Seva Samman in 1996, WHO awarded him with the DIRECTOR GENERAL COMMENDATION MEDAL in May 1998. He was honoured by PM Atal Bihari Vajpayee with the Polio Eradication Champion Award in January 2001. He was also honoured with the DOCTOR OF THE LAST DECADE by Indian Medical Association in 2002. In April 2008, he was received BEST PROFESSIONAL Award by Ghalib Academy of New Delhi and many more. He is also famous as the POLIO-MAN of India because the Project Pulse Polio Programme was run by Dr Harsh Vardhan. In 1995, this programme launched nationwide and 88 million children were immunized. By WHO India was declared Polio free country on 28 March 2014. He has a very clear and clean image in politics.

Send your problems Through mail to Dr Harsh Vardhan

If you want to meet Dr Harsh Vardhan then you can go to this address but make sure you have an appointment.

If you want to write a letter to Dr Harsh Vardhan Then follow this process given below.

You can also contact through an online form. which is available on their website http://web.drharshvardhan.com/contact-us.php .You have to give all the information like the Name, E-mail, Phone, Your Suggestion, Once you fill all details press submit button.