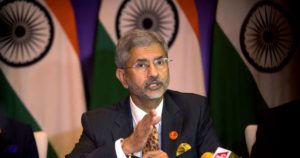 Subrahmanyam Jaishankar was born on January 9, 1955, in New Delhi, India. His father Mr K Subrahmanyam was India’s prominent Indian strategic affairs analyst, commentator, and civil servant. His mother’s name is Mrs Sulochana. He completed his high school education from Cambridge School Srinivaspuri. He pursued his graduation from St. Stephens College, University of Delhi. He pursued his post-graduation in Masters of political science and an M.phil and P.hd in International Relations from Jawaharlal Nehru University(JNU), he specialized in nuclear diplomacy. He married Mrs Kyoko Subrahmanyam with whom he had three children.

In 1977, he joined the Indian Foreign Service. Before coming to politics, he spent 38 years of his life as a Diplomat in India and abroad. He served as High Commissioner to Singapore for two years (2007-09). He also served his duties as Ambassador to the Czech Republic (2001-04), China(2009-13), and the USA( 2014-15). During Indo-US nuclear agreement he played a very important role in the settlement. He was honoured with Padma Shri in 2019. He is associated with Bhartiya Janta Party and is a member of Rajya Sabha representing Gujarat since July 5, 2019. He is currently serving as the Minister of External Affairs of the Government of India. He took oath on May 30, 2019.

If you want to contact the External Affairs Minister Of India by Mobile you can try numbers given below.

Send your problems through e-mail to Subrahmanyam Jaishankar

Write a letter to, Subrahmanyam Jaishankar

If you want to write a letter to Subrahmanyam Jaishankar Then follow this process given below.

Address: You can pick an address from a given list above.