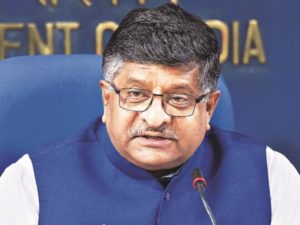 Ravi Shankar Prasad is an Indian politician who was born on August 30, 1954, in Patna, Bihar. His father’s name is Mr. Thakur Prasad. His father is a senior advocate in Patna High Court. He pursued his degree of BA(Hons), Master of Political Science and LLB from Patna University. He married Mrs. Maya Shankar on February 3, 1982.

He came into politics as the leader of the student union for protesting against Indira Gandhi’s government and he went to jail during an emergency in 1975. He was also the active member of ABVP. He also served his duties as a senior advocate in Patna High Court in 1999 and the Supreme Court of India in 2000. In August 2005, he was designated as the National Spokesperson of BJP. He was also elected to the Rajya Sabha for the third time in April 2012. On May 23, 2019, he was also elected in the Lok Sabha. He is currently serving as the Union Minister of Ministry of Law and Justice and also the Communication and Electronics and Information Technology in the Government of India.

If you want to contact the Minister of Law and Justice of India by Mobile you can try numbers given below.

Send your problems through e-mail to Ravi Shankar Prasad

If you want to write a letter to Ravi Shankar Prasad Then follow this process given below.

Minister of Law and Justice,