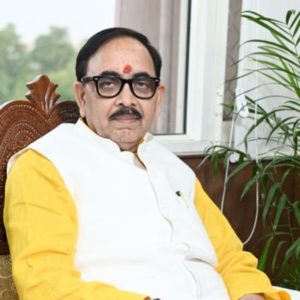 Mahendra Nath Pandey (महेन्द्र नाथ पाण्डेय) is an Indian politician who was born on October 15, 1948. He was born and brought up in a small village of Uttar Pradesh in Pakhapur. His father’s name is Mr Sudhakar Pandey and his mother’s name is Mrs Chandrawati Pandey. He was born into a Brahmin family. He pursued his post-graduation in Journalism and PhD in Hindi from Banaras Hindu University. On May 8, 1985, he married Mrs Pratima Pandey with whom he had a daughter.

He came into politics as the president of the student union of C.M. Anglo Bengali College. He was also the general secretary of Banaras Hindu University. At the time of emergency in the country, he was sent to jail for five months. Later he joined RSS. In the year 1991, he contested elections for the first time in Uttar Pradesh Legislative Assembly. He was also independent in charge of Ministry of State for two years from 1998 to 2000. In 2014 he contested elections from Chandauli constituency with Bhartiya Janta Party ticket. He was also appointed as the Union Minister of Ministry of Human Resource Development from 2016-2017. Then he was replaced and was designated the post as the President of Uttar Pradesh unit of BJP. Currently, in the second term of Modi government, he is serving as the Cabinet Minister of Ministry of Skill Development and Entrepreneurship, Government of India.

If you want to contact the Defence Minister Of India by Mobile you can try numbers given below.

Send your problems through e-mail to Dr Mahendra Nath Pandey

If you want to write a letter to Dr Mahendra Nath Pandey Then follow this process given below.

Mention all the important details here and crisp so that it gains attention.

All the contacts numbers or addresses are mentioned above We collected that data from the internet itself. Please use accordingly.