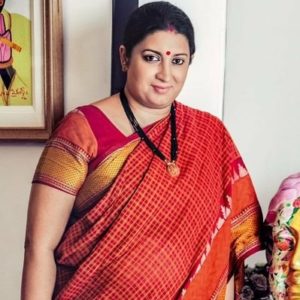 Smriti Zubin Irani was born on March 23, 1976, in New Delhi. She was born into a multi caste family. Her father Mr Ajay Kumar Malhotra is a Punjabi-Maharashtrian. Her mother Mrs Shibani Bagchi is Bengali. She belongs to a family of political background. Her grandfather was a member of RSS. Her mother was a member of Jana Sangh. She went to Holy Chil Auxilium School, New Delhi. For her graduation, she did it from School of Open Learning, University of Delhi. In 2001, she married to a Parsi businessman Mr Zubin Irani with whom she has three children.

Apart from being a famous Indian politician, she is also the popular Indian Television actress. In 1997, she took part in Miss India beauty pageant but she didn’t reach top 9. She got attracted to limelight and fame. So he got the opportunity to appear in many music albums and tv serials. Her most famous tv serial was Kyuki Saas Bhi Kabhi Bahu Thi. She even won Best Actress popular award for consecutive 5 years. For her political career, she belongs to Bhartiya Janta Party. From Amethi constituency, she is member of Lok Sabha. She joined BJP in 2003. She was also the Union Minister for Human Resource Development from May 2014 to July 2016. She is currently serving as the Cabinet Minister of Modi Government as the Minister of Textiles. In May 2019, she was also given the additional duties of serving as the Minister of Women and Child Development.

Send your problems through e-mail to Smriti Irani

Write a letter to, Smriti Irani

If you want to write a letter to Smriti Irani Then follow this process given below.