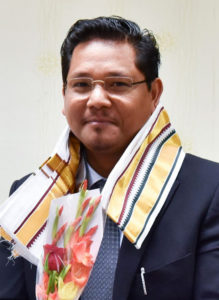 Conrad Sangma was born in Tura, a town in the Hills of Meghalaya. He was born to Purno Sangma and Soradini Sangma. His father was the former CM of Meghalaya. His family share a deep interest in politics as his siblings have been an active politician. He completed his B.B.A. from the University of Pennsylvania and his MBA from Imperial College London. Not only handling politics, but he is also the president of Meghalaya Cricket Association & Sports Academy.

After completing his studies, Mr Conrad gave a kickstart to his political career by being the campaign manager for his father. He was elected to the State Assembly in 2008 and also served in different fields naming Finance, Tourism, GAD, IT & Power.

He is the 12th and the current CM of Meghalaya and has been a remarkable CM so far. He is praised for his interest in work. He represents the National People’s Party(NPP) in the state of Meghalaya.

Get in touch with Meghalaya chief minister with the help of given details below.

Social media is the easiest and fastest way to get updates for anybody. So, if you want all updates from your loving chief minister Shri Shri Conrad Kongkal Sangma then you must need to him on social media platforms like Facebook, Instagram, Linkedin, Youtube etc.,

Finding the address of the chief minister is really not a big task. But the point is if you don’t have an appointment and you are reaching to address it’s totally you are wasting your time. So, make you have an appointment before going to given addresses. You can take an appointment by using other contact methods like social media, contact number, email address. All these things mentioned above.

Meghalaya Cheif Minister office is the controlling point for all the departments which comes under the Government of Meghalaya. The CM Office is located in Meghalaya.

If you want to write a letter to the Chief Minister of Meghalaya. Then prepare a letter with all the information mention below. Send it on office address mentioned above.

You also contact them through by Social Media, Website, E-mail, or Telephone. All the contacts numbers or addresses are mentioned above. Please check according to your convenience.